A statement released by the hall of famer’s family explains that Gifford’s death was sudden and that he is remembered by his wife and children. “Frank died suddenly this beautiful Sunday morning of natural causes at his Connecticut home. We rejoice in the extraordinary life he was privileged to live, and we feel grateful and blessed to have been loved by such an amazing human being. We ask that our privacy be respected at this difficult time and we thank you for your prayers.” Read the statement.

Gifford played the entirety of his sporting career for the New York Giants, where he played both as a full back and as a wide receiver.  He earned the MVP in 1956 for helping the Giants win the NFL championship.  He was also the Pro Bowl MVP in 1958.  His number, 16, was retired by the Giants in 1964 when Gifford retired from playing.

After his playing career, Gifford turned to broadcasting where he worked for both CBS and ABC.  His tenure at Monday Night Football was long and successful.  He also was an occasional guest host on Good Morning, America, where he met his wife Kathie Lee.

Kathie Lee thanked everyone as other celebrities turned to Twitter to express their condolences. 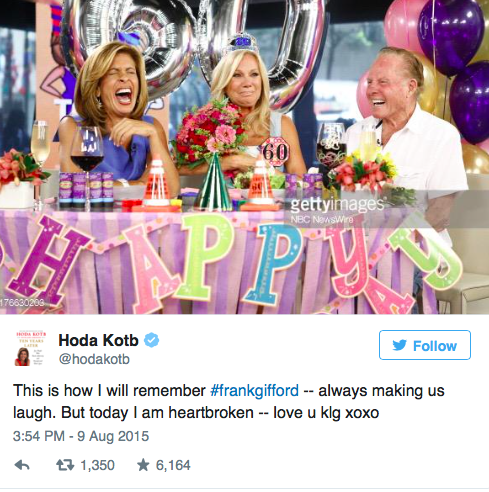 And even Kendall Jenner had a few words about her godfather:

Frank Gifford is survived by his wife Kathie Lee and their two children: Cody and Cassidy.