007 Artists Who Are Ready for Their Own James Bond Song

Rivalries are the reason for sports.  It’s rivalries that add narratives and up the stakes to turn  a match into a worldwide phenomenon.  From Red Sox vs. Yankees, Barcelona vs. Real Madrid, and Patriots vs. Giants, every team has a big rival that makes it bring the most out of its players.  Perhaps tennis is the sport in which rivalries are more serious.  After all, it is a sport based on the individual, and not in the team.  The most wonderful rivalry in tennis, however, is one that while both gritty and demanding, is founded on love.  It’s the rivalry of two sisters who learnt tennis from their dad in the courts of Compton, California.

SERENA and VENUS WILLIAMS squared off again in the 2015 US Open last night.  This time, like most of the times in recent years, Serena took the spoils.  It is undeniable that the Williams sisters are the most successful tennis players since Steffi Graf.  Yes, we’ve had Anna Kournikova and Maria Sharapova in there, but unlike their European counterparts, the Williams sisters have been consistently successful for almost two decades.

The game did not disappoint a crowd that included DONALD TRUMP, OPRAH WINFREY and KIM KARDASHIAN.  The intensity of the game made it clear: these sisters may show their love everywhere from their lives to press conferences, but in the tennis court, they play their best game.  How close was it? Serena won 76 points to Venus’ 75. 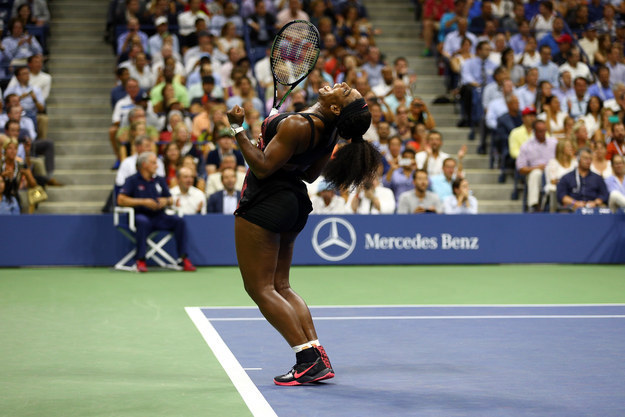 Serena is currently number one in the WTA’s rankings, and it is expected that she’ll win the US Open.  This will bring her level with Steffi Graf in terms of major championship wins, and leave her two behind Margaret Court’s 24-championship record.  After the game, Venus, who is 15 months older than Serena, spoke to the media about her sister’s chances of winning the Open saying: “That would be huge, not just for me, but for my family, just for what it represents and how hard we have worked and where we come from. So it would be a moment for our family.” However, Venus knows that the records don’t change the objective truth: Serena is the best tennis player in the world. “But at the same time, if it doesn’t happen it’s not going to make or break you. We don’t have anything to prove. She has nothing to prove. She’s really the best ever.”

Venus, 35, was the oldest player in the US Open this year.  It was widely believed that this was her last chance to win it again after her two victories in 2000 and 2001.  While she will be disappointed she didn’t get her treble, surely her sister winning it would soften the blow.