Movies You Wanna Watch on the new TV & Digital Series, THE WANNA delivers cutting edge entertainment and exclusive celebrity interviews from several world famous film festivals!  MYWW will feature the best of the best films to watch this season all before they hit the theaters!

The action packed thriller is NOW available for pre-order on Blu Ray and DVD!

“Hitman: Agent 47” tells the story of a genetically modified clone known only as Agent 47 (Rupert Friend) who must find and protect a woman named Katya (Hannah Ware) from the evil forces of an organization known as The Syndicate.   Along the way they meet the  dangerous John Smith (Zachary Quinto) whose real allegiance is a mystery!

Rupert Friend told Gina how his fiancee reacted to his new look!  Hannah Ware revealed her Hollywood career came by accident!  And Zachary Quinto tells us this might be his last villainous role! 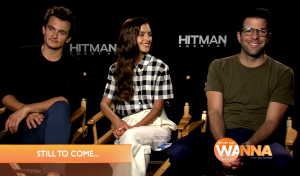 Don’t wanna watch on cable tv?   Then tune in to  MYWW streaming LIVE on Apple TV!

“Ya know you wanna!”

How To Write A Video Game Review Like An Expert?

Writing a video game review like an expert requires both knowledge of the game and the ability to... more»